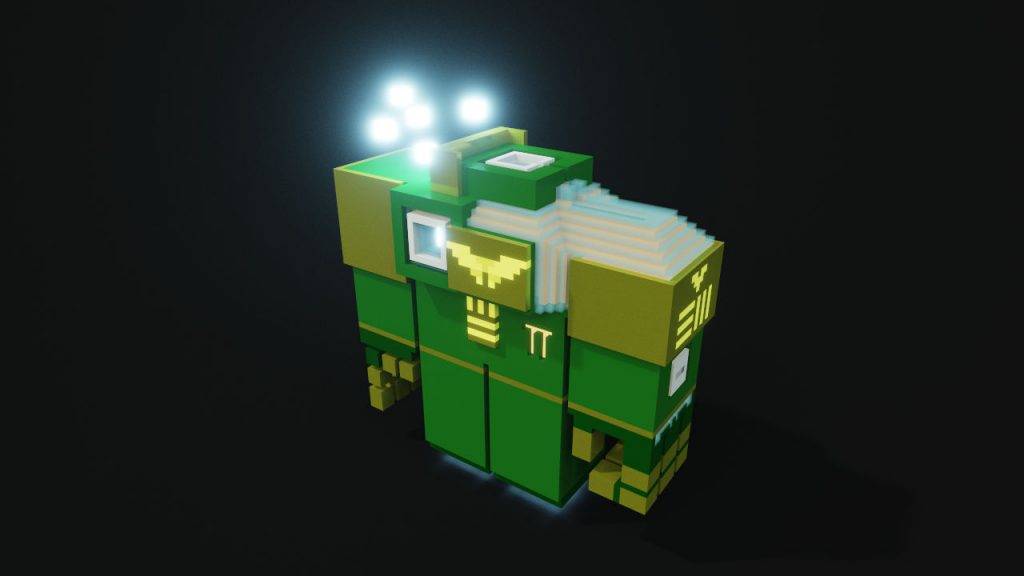 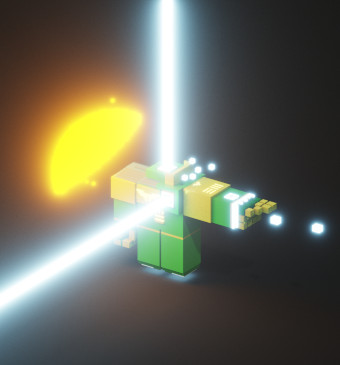 Constructed of super dense, nanite controlled, flexible, nano powered, self-healing armor and at just under 3 feet (90 cm) high; he weighs in at 9.9 short tons (9 tonnes). Two inches of this armor is equivalent to five feet of the best conventional navy ship armor. His sheer weight means he is required to use his inbuilt variable-fan foot repulsors to spread the load so as not to damage ship decks. These can also be used to “jump” extraordinary distances and move exceptionally fast; a fact belied by his size and bulk.

His unusual “no rear” design means he essentially faces backwards and forwards at the same time. This can be very disconcerting to those walking and/or chatting with him as he holds no preference for forward facing.

The yellow horizontal stripe visible in this, his “Eagle Force” livery is actually a suite of sensors used for true simultaneous, 360 degree, spherical awareness. This “stripe” is not visible in his normal livery of near perfect, reflection-less black. He also has an internal awareness of surrounding masses meaning he can literally see behind walls. It is not based on graviton detection and the mechanism used is not understood. The range and extent of his mass awareness is unknown.

He is powered by five miniature anti-matter sources in each limb and torso.  His front / rear chests and head locations support tunable 750 Gigawatt particle weapons equivalent to small ship board cannon.

One shoulder is fitted with an anti-grav/tractor combination force shield for protection and assault. It can be focused and directed to a limited extent by arm movement. The other shoulder has a supply of anti-grav reconnaissance drones and/or small yield bomblets.

Each arm can take on multiple configurations but normally one hand has a variable number, and sized, set of fingers depending on the dexterity or strength required. The other arm has field controlled, high density armor blocks for fingers and hand functionality or, when that arms anti-grav/tractor unit is ramped up it becomes a “rail gun” where the blocks are used as individual high density slugs reaching supersonic speeds. Multiple slugs can be fired at once in a spread or focused formation. A small resupply can be ‘slowly’ manufactured  and is available from the torso “ammo” compartment. These “slugs” can be programmed to decay into basic compounds in just a few minutes so the composition and construction can’t be reverse engineered after deployment.

His angular blocky, no exposed components shape, simplifies damage control. He has no “moving/sliding” parts so if a limb “joint” is incapacitated he merely moves (flows) the joint function slowly to an undamaged point to obtain movement again, though it may be limited.

His Class proudly display their self-healing, sharp edged profile as a mark of defiance and superiority, as normal armor is usually angled or rounded to reduce ablation and damage.

Communications are via audio or peak coded message. He has no mouth but rather the audio can emanate from any part of his body which is really annoying when it suddenly comes from his foot during a conversation (see below). He can broadcast on all of the known electromagnetic spectrum and also in other areas including X-Ray. He is known to use quantum coupling with his counterparts because of overheard comments about the death or loss of another. Some suspect he can detect Tachyons.

All up “Pie” (his self-chosen real name) and his class are formidable entities. Yes, he purposely misspelled his name which appears on his chests. After being around humans for many years he has developed a sense of humor, annoyingly so when in conversation with someone.

The Golem Class were designed to work in small and large teams combining as a single mass for direct assault or could act as an impenetrable segmented wall for protective services requiring no additional support at close range. One thousand of his class were built by a small, genius break-away A.I.A. nation who called themselves  “Luddites” to act as the ultimate deterrent to their nation being dragged into the Human vs A.I.A. Rebellion years ago. The Luddite demanded their absolute neutrality from the two warring parties.

Both Human and A.I.A. tried to force them to the negotiating table but when that failed they tried more direct means. Firstly, the Humans sent their 4th fleet of 48 naval ships to place an embargo on trade with-in the Luddites solar system unless they aligned with the Humans. The Luddites responded to the blockade fleet with only 4 Golem Class A.I.A. and no support, resulting in all but 6 ships being incapacitated within 30 minutes; the last 6 ships were surrendered by their on-board A.I.’s who over-ruled their human captains.

The A.I.A. Alliance announced that the “Human loss was pathetic and to be expected” but contrary to that statement, they sent in three quarters of their total fleet resources. They soon learned a lesson which cost them their war against the humans. The Golem annihilated the entire fleet of hundreds of ships. It’s believed the Luddites lost a little over 60 Golem.

What happened next is a mystery. The Luddite home planet and all their outposts were suddenly engulfed by miniature black holes, leaving no one. Most Golem were lost too, with only a couple of hundred remaining because they were off-world at the time. It’s believed the Luddites were using Alien technology or were working with an unknown race. This has certainly been reinforced when, over time, various efforts had been put into capturing and understanding the Golem Class A.I.A. technology but to no avail. All attempts have ended prematurely in destruction, by black hole, of the Golem A.I.A. concerned and the facilities they were held in. Since then an agreement between Golem Class, Human, and A.I.A. Alliance has ensured they are free agents and not to be molested or coerced.

With only a couple hundred remaining, and because of their formidable power, the Golem Class A.I.A. are now independent agents who choose to align or not with others and each other.

“Pie” has agreed to work with “Eagle Force” as a special favor to his friend Lt. Col. Eagle and because of the dire position the known universe finds itself in with the arrival of the “Minus K” threat.

All feedback would be appreciated.